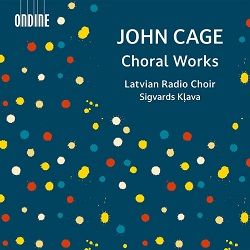 This new album release by the Latvian Radio Choir and conductor Sigvards Klava on Ondine is devoted to choral works by the legendary American composer and music pioneer John Cage (1912–1992), one of the most leading figures in 20th Century music.

John Cage is the dictionary definition of an avant-garde composer. Choral music and John Cage might seem like an odd pairing. And indeed, strictly speaking, Cage wrote only two compositions for chorus, both of which appear on this album: Hymns and Variations (1979) and Four2 (1990). The other works on the album are written for ensembles that are more or less open-ended and which have been interpreted here for choral forces. One reason Cage and choruses did not mix well may have been his notorious hostility to harmony in music. Arnold Schoenberg told Cage that he lacked any feeling for harmony, and that this would be a wall between him and his goal of being a composer. Given all this, it is no wonder that Cage and choruses didn’t tend to mingle together. And so it was not until Cage was 67 years old that he wrote his first work for choral forces: Hymns and Variations.

The two Hymns in Hymns and Variations are literally that: two four-part pieces by the early American composer William Billings, from his collection The New-England Psalm-Singer (1770). Cage took these two pieces (“Old North” and “Heath”) and applied a method of subtraction and extension to create both the Hymns and the variations. A decade later, Cage started a series of works known as his “number pieces”. These pieces all feature simple materials (mostly single notes) whose timing and duration are unpredictable within broad limits defined by “time brackets.” They range from solos (the One series) to full orchestra (Sixty-eight, Eighty, 103, etc.). They represent a surge of creativity in the last two years of Cage’s life; he saw them as a really new direction in his music and was quite excited to work on them. Three of them are heard on this album: Five (1990), Four2 (1990), and Four6 (1992). Even though composed using broadly similar methods, the number pieces have individual voices and styles. Four2 was written for a high school choir (the text is drawn from the letters in the name of the school’s home state: “Oregon”). Written with a chorus in mind, it connects most directly to that tradition. The other two number pieces here do not specify ensembles, but are suitable for voices. Five was one of the very first of the number pieces. The five parts have particular pitch ranges (mostly on the higher side) and any voices or instruments that can play the pitches can play the piece. Four6 goes further still. Here, even within the individual parts the choice of specific sounds is left to the performer. Each musician is instructed to select twelve sounds that can be extended in time in a static way. The score then references these by number and places them within the time brackets. So when we hear Four6, we are hearing sounds chosen by the performers that are arranged in the flexible architecture of time composed by Cage. Cage viewed these pieces as a turning in his music at long last towards harmony: “I’m surprised at almost all the ideas that come to my head,” he said in an interview in 1990, “because they have to do with harmony.”

The Latvian Radio Choir (LRC) ranks among the top professional chamber choirs in Europe and its refined taste for musical material, fineness of expression and vocal of unbelievably immense compass have charted it as a noted brand on the world map. The repertoire of LRC ranges from the Renaissance music to the most sophisticated scores by modern composers; and it could be described as a sound laboratory – the singers explore their skills by turning to the mysteries of traditional singing, as well as to the art of quartertone and overtone singing and other sound production techniques. The choir has established a new understanding of the possibilities of a human voice; one could also say that the choir is the creator of a new choral paradigm: every singer is a distinct individual with his or her own vocal signature and roles in performances.

Sigvards Kļava is one of the most outstanding Latvian conductors, also a professor of conducting and producer, music director of the Latvian Radio Choir since 1992. As a result of Sigvards Klava’s steady efforts, the Latvian Radio Choir has become an internationally recognized, vocally distinctive collective, where each singer possesses a creative individuality. Under Sigvards’ guidance, the choir has recorded a number of choral works by little known or completely forgotten composers of the past, as well as formed a friendly collaboration with a number of notable Latvian composers. Sigvards Klava is a professor at the Jazeps Vitols Latvian Academy of Music. Klava is a multiple winner of the Latvian Great Music Award.